Remote controlled sex toys are incredibly amazing. They add to the fun you could have with your partner and can be thoroughly enjoyable. and could be a viable option for people in long distance relationships. While Skyping and FaceTime might make it easy to stay in touch, the element of physical intimacy is still missing. While nothing can replace physical presence, getting intimate can be a lot easier with toys like the Lovense Hush 2. 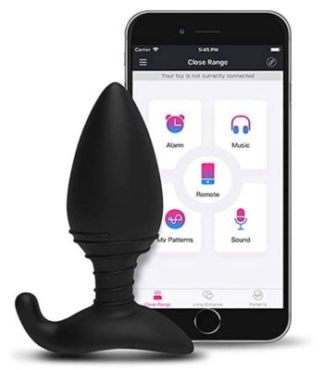 Buy it on Lovense now

Features define a product, and Lovense Hush sure does love to show off. And that makes complete sense; this is, after all, a feature-rich butt plug.

The Lovense Hush App is an amazing feature. It is available on PlayStore as well as the AppStore, and really enriches the experience. The Hush connects to your smartphone via Bluetooth, and the app becomes the remote control. It requires some effort to get the pairing done, but the one-time effort is worth having the app as the control. A tiny LED lights up when the pairing is done and is aided by the Hush vibrating to keep you on topo of things.

Those in a long distance relationship will appreciate that the app also includes a message center to allow chatting. You won’t need an extra app running for communication during your intimate session.

Pleasuring by sound brings us to a rather unique feature. The Lovense Hush can actually be controlled simply by sound. That means you could enjoy some public play and have the background noises do it for you. Or, as a more creative solution for long-distance couples — let the voice of your partner move things around. If he knows what he’s doing, he’ll manage the pitch of his voice to control the vibrations.

The Lovense Hush butt plug is made from a rather soft and amazing to touch silicone in a matte finish. It does feel like a premium product to the touch. There are grooves at the back of the Lovense Hush, which it says are used to trap lube so things go a lot smoother. That’s somewhat dubious as far as I’m concerned, though many people do find it useful.

The battery works for about 1.5 hours of continuous use, so there is plenty you can do with the Lovense Hush. This also opens the door to some intriguing possibilities of public play! Many consumers, however, continue to complain about the low overall life of the battery, some saying that it lasts only for a few uses.

Lovense Hush Review — The Use And The Fun

It is best to use this toy with a lubricant. Since its body is made from silicone, the suggested lube is water-based. However, using a water-based lube can be quite challenging as it will take some time, and water-based lube dries up quickly. Silicone-based lube could be a more appropriate choice, but it is not recommended for use with silicone toys.

If you have a half-decent internet connection, you can easily share controls for the Lovense Hush with your partner. Public play is an important aspect of this butt plug, and features like the sound-based vibrations lend themselves quite easily to public play. The Hush is a bit noisy, so it is best to use it in a place that has some background noise. Using it in a busy restaurant would work just great, but it isn’t the best choice to enjoy some pleasure to exorcize boredom at work. Or, as Lovense suggests, turn on the sound mode and hit a club or theater, and let the music work things out for you!

The freedom to create your own vibration modes is a big plus, especially if you know exactly what you want. It is super convenient to have a pattern of your choice saved on the device, and simply hit play when you want to enjoy some pleasure.

Lovense Hush is unobtrusive, and you can go about your daily routine without having to worry about the butt plug inhibiting your movement or dislodging from its place. You can walk and sit unencumbered, and the Hush will stay right in its place.

While I often mention the sharing of controls with your partner, it is worthwhile to point out (or simply to underline the fact) that the Lovense Hush works great in solo mode as well.

Buy it now from Lovense