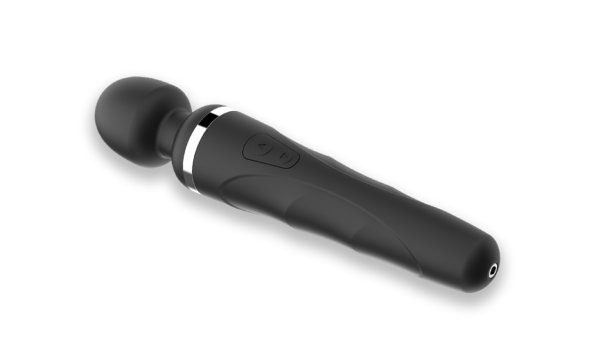 Power is an important aspect for the Lovense Domi 2 wand massager, but it goes way beyond that. I could say Lovense Domi 2 isn’t all about force and power. It also gives itself space to be customizable, flexible, and immensely enjoyable.

Lovense Domi 2 is a powerful, hot piece of technology, that somehow decided it needed a glowing ring around its neck. No seriously, that ring of disco lights will shine when you use the Domi 2. Why? I have no idea, but apparently someone thought of shining a light on the clitoris.

Like other Lovense products, the Domi 2 can connect to the Lovense app and be remotely controlled. Controlling pattern and intensity settings is as easy as moving your hands on the phone screen.

A majority of the Lovense Domi’s functions are accessed through the app. These also include those shiny disco lights. If you choose not to use the app, be prepared to have limited vibration and pattern options, as well as “always on” disco lights. 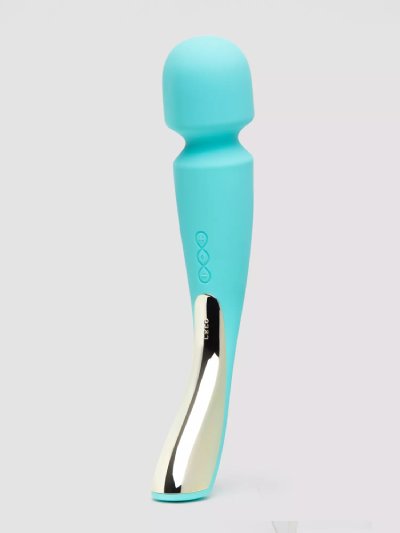 LELO Smart Wand 2 brings a touch of luxury to the magic wand. It’s all coated in LELO’s very classy, velvety smooth silicone, which itself is a pleasure to touch. The shiny, metallic part you see on the wand is ABS plastic, added there for better grip and easy control of the massager.

Delivering thumping, high-intensity vibrations isn’t LELO’s style. Instead, you get deep, rumbling vibrations that work beautifully and push you towards an orgasm.

Тhe Magic Wand Original used to be called the Hitachi Magic Wand. However, it is better known as the Cadillac of Vibrators, a well-earned term of endearment and stamp of approval from happy women worldwide.

Continuing our history lesson from above, the Hitachi Magic Wand is a bit of a misnomer now. Hitachi wasn’t all too happy in being associated with vibrators and the wand no longer carries the Hitachi name. Instead, distributor Vibratex now sells the magic wands under the name of Original Magic Wand and Magic Wand Original. The slogan of powerful, penetrating vibrations still stands, and thankfully, still holds true! 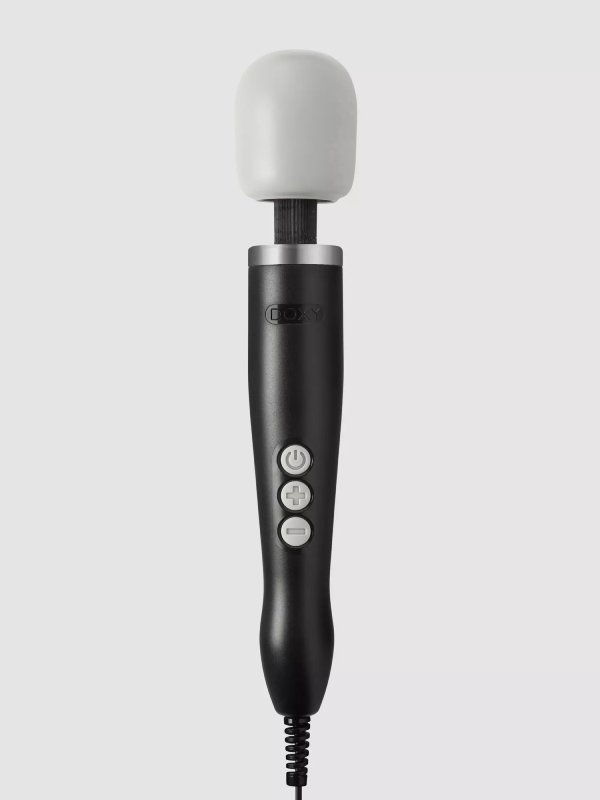 Controls and buttons on the Doxy Massager are very convenient and comfortable. They’re large, well-spaced, and easy enough to reach and press. It might seem trivial, but conveniently hitting the right button for controls is a huge plus when you’re pleasuring yourself. 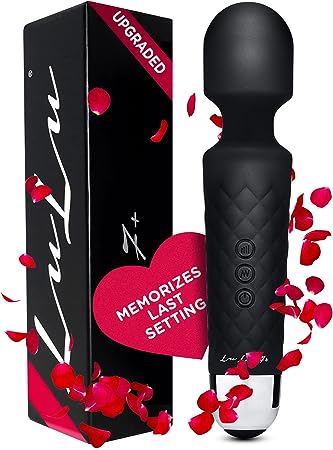 The LuLu 7+, and most magic wand vibrators take some design inspiration from the original that is the Hitachi Magic Wand. The larger change comes in the form of updated looks and a greater acceptance of being used as vibrators (Hitachi Magic Wand still insists on being a massager). And as far as clitoral stimulation goes, magic wand massagers are amazing at their job. Although, you may consider bullet vibrators for smaller size, or rabbit vibrators for more functions, in general terms of clitoral stimulation.

With all its patterns and settings, the LuLu can get to pretty intense vibrations, so if you like your wand vibrators strong, this one might just do the trick. It is powered by a Li-ion battery that gives 2 hours of usage on a full charge..

The Shibari Mini Halo can be used anywhere. It's compact size is perfect for travel and comes with a smooth velvet pouch for massages on-the-go.

Shibari Mini Halo is a compact wand massager. Keep in mind, compact is a relative term for wands. They are usually larger than bullets, though there are some wand-shaped bullet vibrators! This one measures 7.8-inches in height and has a maximum diameter of 1.6-inches.

Shibari Mini has a high-strength motor, which although not as strong as the Hitachi, still is pretty strong.

Shibari has 20 vibration modes, and intensity settings, so there’s a good chance you’ll find one that works right for you. It is coated in silicone for a soft, velvety feel, and has a bendable neck for more flexibility in massage and targeted vibrations.

Shibari Mini Halo is battery operated and USB rechargeable, with the battery lasting two hours on a full charge. It is water resistant so it can be used nearly anywhere, however, it is not waterproof and should not be submerged. The Shibari Halo has pretty amazing reviews and has been one of the top sellers and best-reviewed wand massager/vibrator on Amazon for a long time. One enthusiastic reviewer says “Buy. It. Now. If you can go back in time and buy it yesterday, do that.” 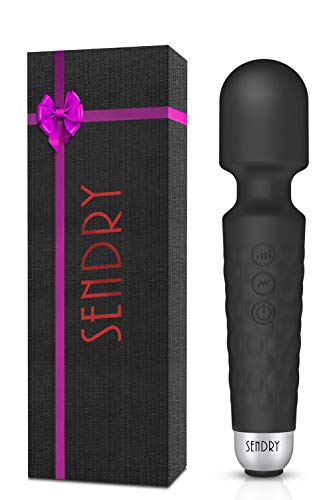 While most of the wand massagers listed here aren’t really expensive, the SENDRY Personal Body Massager is a great option if you are looking for a bang for the buck model. Made from ABS plastic, this wand massager is as body safe as silicone, albeit without the soft and velvety feel.

Its looks are somewhat inspired by the Hitachi Magic wand, and though this lacks the same power, it makes it up in convenience and functions. There are 10 vibration modes and five speed modes on offer. SENDRY body massager goes to a high 6700 rpm speed, which is 700 rpm higher than the max of the Hitachi Magic Wand but does not feel as powerful.

Wand vibrators have traditionally been the more powerful option for clitoral stimulation. While that still holds true, there are more ways to control the vibration strength and get it to your liking.

Most vibrators now offer multiple settings for power and intensity control, as well as a range of preset patterns for you to enjoy. Take control in your hands and find the intensity and power settings that work best for you.

If power is your thing, you will want a magic wand that draws its juice from the mains. The famous Hitachi Magic Wand draws is wired, and does a pretty good job at providing deep, rumbling vibrations.

Going wireless frees you from the constraints and encumbrance of wires, letting you enjoy at your convenience, without being limited by the distance wires will allow you. Modern battery powered vibrators can be fairly powerful as well, and wireless versions of the famous magic wand have shown up as well.

Waterproofing And The Magic Wand

If you prefer to take the magic wand to the shower or the bathtub, you will need something that is waterproof. Keep in mind, water-resistant is not the same as waterproof. It’s best to keep activities where the wand will be exposed to water limited to certified waterproof wand vibrators.

Even the best magic wand vibrators can get noisy. That’s unfortunately just part of the power they bring to the table. Many magic wand massagers make attempts at keeping the noise low and see some success. Although wired massagers generally continue to be noisy.

Body Massage With The Magic Wand

Compatibility With Add-Ons And Accessories

The popularity of the Hitachi Magic Wand saw a number of add-ons and accessories being developed to increase its functionality and uses. Most high-quality magic wand massagers continue to be compatible with these accessories. It’s a nice bonus if you want more functionality, and don’t necessarily want to buy the magic wand original.

Magic wand massagers are available with some flexibility in size. While the shape of most magic wands remains the usual and familiar, the sizes can vary quite dramatically.

Staying Away From Counterfeits

The popularity of the original Hitachi Magic Wand has led to several counterfeits going around parading as the original. While other vibrators too suffer from the same problem, magic wand original continues to be a hot target for counterfeiters.

Do your research and purchase only from reputed sellers (whether brick and mortar or online). The Hitachi Magic Wand Massager or the Magic Wand Original only come from Vibratex, while the body massagers made by Hitachi are available as well.

When purchasing online, even from reputed websites like Amazon, pay attention to the actual seller listed, and see if they can be trusted to deliver an original product.

The magic wand vibrators listed here are all excellent for use and the best wand vibrators in their own right. It is difficult to call one the “best” since the choices are affected by individual tastes and preferences. However, many of these magic wand massagers are clear winners in specific categories. If you want power, the Hitachi Magic Wand should be the go-to, if you prefer deeper vibrations with a touch of luxury, the Lelo Smart wand could be the right fit.