7 Best Remote Control Vibrators In 2022 to Play In Public!

Modern technology has a lot to offer, and it’s not just wireless vibrators. Remote control vibrators are amazingly adept at what they do. And they have features to be uniquely suited for specific needs.

Let’s take a look at the 7 Best Remote Control Vibrators For Different Needs In 2022.

In a hurry? Here’s Our Top choice: Lovense Lush 3 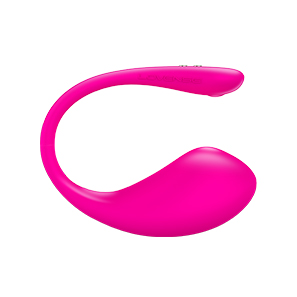 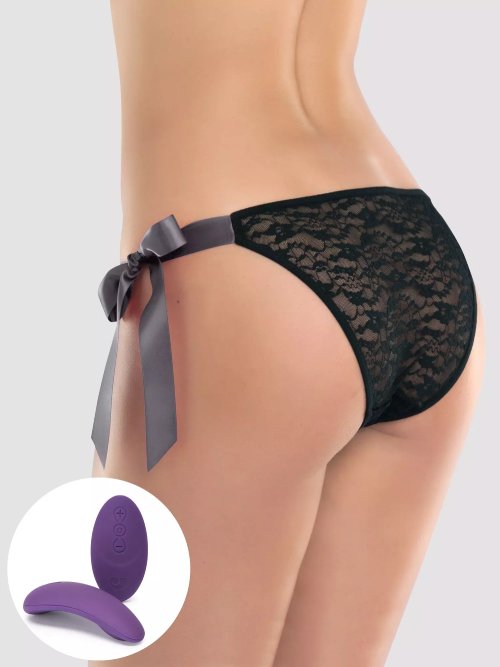 A dedicated remote control is included. Fairly simple to use, the remote has three buttons laid out in a single line. A power button brings it to action and the “+” and “-” buttons make it possible to cycle through the various speed and pattern options.

If you want to see more options for wearable vibrators or vibrating underwear, check out our list of best vibrating panties.

This love egg is a versatile toy that helps deliver earth-shaking pleasure whether you're playing alone or with your partner. With a remote control that works at a distance of up to 10 meters, foreplay can even begin when you're in different rooms.

An Intensity, playfulness, and pleasure come together in this orgasmic vibrating egg.

The material is always nice to touch, but the quality of Fifty Shades of Grey Relentless Vibrations Egg makes it feel lovely. It feels great in the hands – and as good when it’s inserted.

The remote control here is something of a donut shape. It isn’t exactly tiny, but it’s convenient enough to hold in your hand. Or run fingers through it and use the thumb to control vibration and pattern settings.

The declared range here is 10 meters/32 feet, but for practical use, let’s consider it limited to 15-20 feet at most. Don’t forget it has to be in the line of sight for proper use. 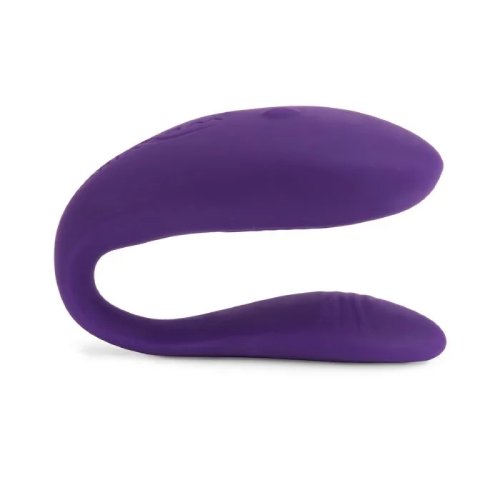 We-Vibe Unite stimulates the clitoris and G-spot for mind-blowing sensations and hands-free fun.

Benefits also come from We-Vibe’s skill at making great vibrators. The vibrations here are deep and rumbly and set the course straight for earth-shattering orgasms. 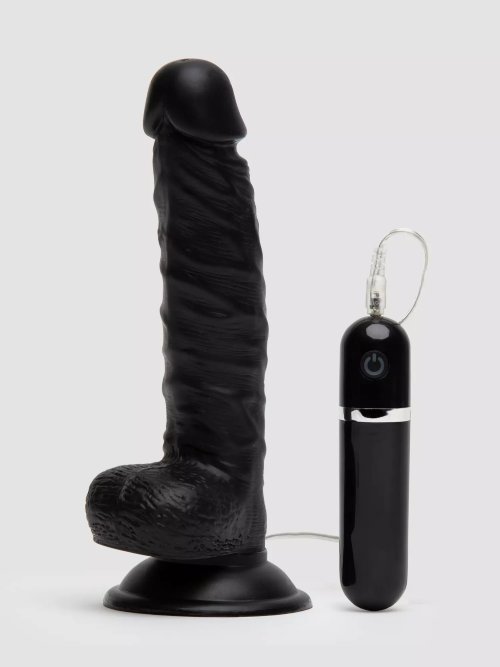 8 deliciously erect inches of pleasure combined with powerful speeds and patterns are yours. Yes. Really. With a super-versatile wired controller and a suction-cup base to free up your hands, we are proud to introduce you to a large helping of aww yeahhh.

It’s fairly versatile and is compatible for use with harnesses as well. Even with its realistic look, it has a rather pronounced texture at the trunk which makes it all the more pleasurable. Of course, there’s a touch of texture for the penis look as well. It’s enjoyable and very pleasurable. Plus, you don’t necessarily have to rely on vibrations. 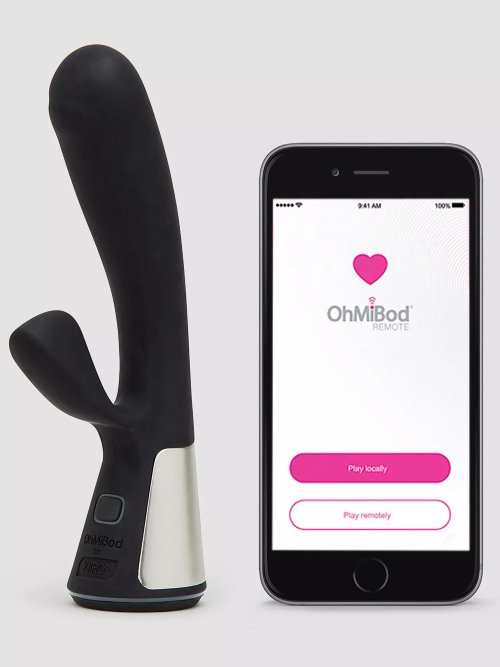 Use solo or connect via bluetooth to a partner's phone, or Kiiroo Onyx Masturbator, for a truly unique experience that can even be enjoyed over long distance. The rabbit can be enjoyed in manual mode, with 7 vibration patterns, or in 'interactive' mode using the FeelConnect app. Plus it has an innovative touch sensitive mode that vibrates on contact with skin. 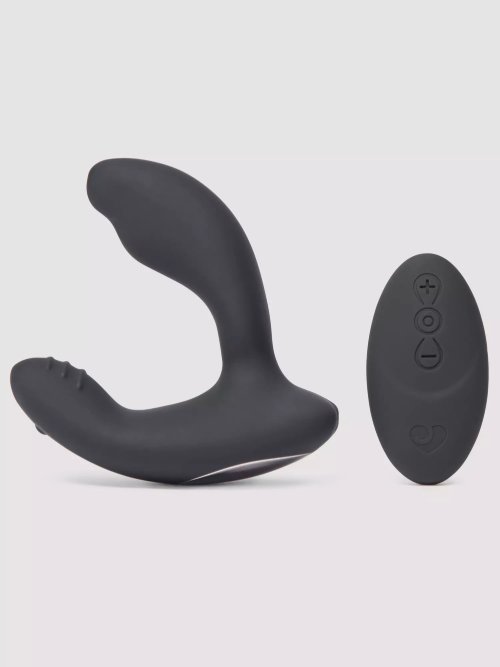 L-shaped for complete safety in play, the horizontal arm also directs scintillating vibrations to the perineum. Designed for hands-free wear, use your prostate toy to intensify lovemaking or as a sexy solo treat.

Desire Luxury Rechargeable Remote Control Prostate Massager is a prostate massager par excellence. Its build is quite similar to another excellent remote control prostate massager, the Lelo Hugo. The insertable arm juts out from the base, while the base itself extends to cover the perineum.

By and large, the prostate massager is fixed and inflexible. However, it gives some way at the root where the insertable side meets the base. This makes it possible to adjust the massager right and be more comfortable for the user.

A dedicated remote is available to control the prostate massager. It’s also available as an app-controlled prostate massager, though that’s slightly more expensive. Both of these are superior options to competing remote control butt plugs.

The massager offers eight vibration modes with 12 speeds and an effective remote control range of 8 meters/25 feet. For practical use, that range is more like 10-15 feet, depending on location and line of sight.

Being covered in silicone makes it a pleasure to use and easy to clean. The best part is its uncanny ability to hit the p-spot every time and bring on a strong orgasm. It’s priced right and is one of the best sex toys available for men.

And this is where it gets interesting.

Many vibrators allow an infinite number of pattern and vibration settings that can be used via the app.

The range of a Bluetooth connection is limited to a few feet. For actual use of a sex toy, I’d recommend staying within 10 feet. However, once the internet comes into play, the range is the globe.

This could be a subset of the App Controlled Vibrators, but the set is too important to not warrant a class of its own. Pair play sex toys are the future. In these cases, the sex toy connects to the app via Bluetooth. However, rather than just one toy being involved, there are two, and both respond to the motions of each other.

Rather than using the app as a remote to control a sex toy, the simply becomes a medium allowing for the two sex toys to interact. For example, the man may be using a Lovense Max, while the woman may be using the Lovense Nora simultaneously. The motions each of them make with their sex toy, are echoed on the toy of their partner.

It’s a rather promising area, and I can’t wait to see the new developments that come with these sex toys!

Your vibrator’s remote adds spice to your sex life. Play a bit, get naughty, and let your fantasies fly. New toys can metaphorically reduce the distance between lovers, by providing means through which lovers in long distance relationship can share intimate moments together. Here are some things you can expect.

Read more: Find the most powerful vibrators on the market.

Simplicity and ease of use has to be a big part guiding your choice. Something that requires extensive effort or knowledge to use just defeats the purpose of a remote. Who wants to consult an instruction manual while in the heat of the moment?

Remotes come in several flavors. Most are wireless, wifi or bluetooth. like the ones most of us are used to. We hit buttons, the device responds. It’s simple and convenient – there’s no need to involve wires. An obvious advantage of wired remotes is that it lowers cost.

The noise is often a consideration, but it can be more pronounced in the case of remote control vibrators. Many people use their vibrators for public play, with one person handling the remote.

Some Problems Remote Control Vibrators May Have

Unfortunately, there are some problems that plague the world of  remote vibrators. For example, modern Bluetooth vibrators and known to often lose connection with their remote control. Since app-based vibrators rely on Bluetooth connectivity, the same problem continues.

Remote control is the future of vibrators, and it is getting big. While the technology is still being perfected, there are many vibrators that can also be controlled by a mobile app, for example, the We-Vibe Connect app.

For the moment, the conventional remotes work best. There’s plenty of them, and they offer a whole range of functions and more importantly, ease of use.