Fleshlight Go series is a smaller, more compact version of the classic Fleshlight. The general idea here is to lose some weight and be portable. Even if it’s just slightly lower on measurements of size and weight, it does make a fair difference. With this Fleshlight Go review, we’ll see if the Fleshlight is as useful, or if it has lost some quality along with its length and weight. 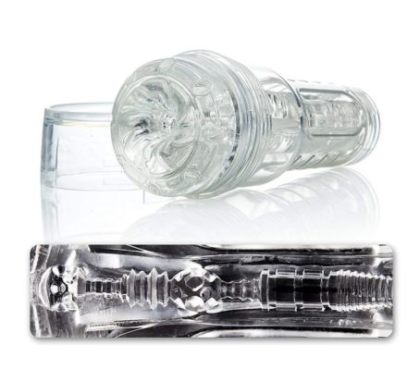 The Go series has two variants/models available. Both models have the same general idea in terms of size and stimulation, but their appearance differs dramatically. Here’s a quick look.

Fleshlight Go Torque: I find this to be the more interesting model simply because of its unique construction. The Torque is transparent, well, translucent if we’re beings specific. That voyeuristic angle adds a fair bit of excitement.

Fleshlight Go Surge: This model follows the classic look of the Fleshlight. Its orifice is shaped like a vagina, and the pocket pussy is pink in color. Surge is same in size as the Torque, but its texture is different. The Surge has two canals with diagonally placed nubs as the primary texture. These canals are separated by two spheres connected by a small entrance. The spheres have long-stemmed bumps, like those in the wonderful Fleshlight Destroya.

It is the Torque that makes a quick grab for your attention. The Fleshlight Go can be seen as similar to the Fleshlight Flight series, with both having similar dimensions and weight. Another interesting touch is the use of transparent sleeves. However, unlike the Flight which shies away from using a transparent case, the Torque has a transparent case for its sleeve. Seeing the penis in action as it thrusts through the Superskin can be quite a sight. That little voyeuristic touch can fire up your imagination while providing a great view for couple’s play.

Total insertable length for the Fleshlight Go Torque male masturbator is about 7-inches. That’s a sufficient size for an average sized – or slightly more than average sized – penis. It’s large enough to include most penis sizes. If you’re well over the insertable length and aren’t absolutely hell-bent on completely entering the Fleshlight, there is no reason why you can’t have fun with this pocket pussy!

It has an opening with a neutral and simple hole placed in a design similar to a vortex. The neutral orifice is another point of similarity with the Flight series and is visually a larger contrast to the Surge variant.

As texture goes, the Fleshlight Go Torque is divided into three major sections. When you enter, you’ll reach a small sphere with long-stemmed bumps, getting off to a good start. This is followed by a ribbed transition canal that starts with a very low diameter that forms an excellent contrast to the wider spherical chamber. It also creates a feeling of tightness and grip that would seem stimulating.

After continuing for a small distance, the canal eventually widens up, though the ribbed texture continues. It opens up into the second, wider spherical chamber. This one too has long-stemmed bumps, much like the previous sphere and the transition from the tight canal to the wider sphere can feel exhilarating. You again get a transition canal, though this one is slightly wider than the previous canal.

This canal opens up into the last chamber. Interestingly, this chamber has cavities facing away from the penis, unlike conventional texture strategy of placing texture towards the penis. This chamber also functions to control most of the sucking power of the Fleshlight. The vacuum can be controlled by moving the cap at the other end of the masturbator.

Starting Off With The Torque

If you touch the Superskin on the Fleshlight Go, you’ll find it feels a bit sticky. Not adhesive-like sticky that clings to your fingers, but an obvious stickiness that will make itself known to the touch. If you use it without proper lubrication, the Fleshlight won’t feel great and you increase the chances of damaging the sex toy. So be liberal with the application of lubricant, preferably water-based lubricant. It enhances the feel of your session and will make your sex toy last longer.

If you’ve previously not enjoyed the role of the suction cap, keep that in mind as well, and be prepared to remove or loosen it depending on your preference.

As you insert your penis into the Fleshlight Go Torque, you’ll find it feels amazing. Well, and you’ll be able to see the penis move through the Fleshlight for an added sense of thrill. The visual is one point where I think the Tenga Flip Hole falls behind the Torque. Seeing the penis travel the length of this male masturbator has its own charm.

The stars for the stimulation are the spheres, but the canals work exceptionally well too. Its mix of constricted canals and wider spheres make this Fleshlight quite amazing for stimulation, and this male masturbator certainly does its job pretty well. You’ll find that sessions with this male masturbator barely take a few minutes. The goal here is not to put you through intense stimulation and elicit an orgasm like the Fleshlight STU. Fleshlight Go Torque is more about letting you enjoy the sensations for a longer time as you build up to an orgasm.

You should get to cleaning your masturbator within an hour of its use. Letting warm water run through the Fleshlight will help make the cleanup easier. Don’t be afraid of using your fingers to ensure all points have been thoroughly cleaned. You can use the cleaning solutions provided by Fleshlight to ensure the masturbator is cleaned properly. And of course, wait for it to dry completely before you decide to put this pocket pussy into storage.

Where portability and increased maneuverability are the major concerns, the Fleshlight Go can easily be your toy of choice. As you saw in this Fleshlight Go review, it has some combinations of intense texture to keep you company, so there is no dearth of stimulation. The see-through design and the possibility of greater stimulation to the average size penis can also be guiding factors for your choice.

Buy it now on Amazon