Design And Packaging Of The Njoy 11

The smaller end is about 1.75-inches in circumference and is followed by a few ridges along the shaft for added sensation. These ridges are placed only on one side, the other side is smooth. Moving on to the larger bulbous end, this one has a circumference of 2-inches and a slightly more pronounced curve. Both ends have a fairly large diameter and neither can be considered “easy” to insert. The shiny and smooth steel, however, does lend a hand and makes it easier to play with this sex toy.

That weight might seem easy enough to lift, but holding it for a long time and thrusting with this sex toy is pretty much a workout in its own right. If you have problems with muscles, joints, or a medical condition related to mobility issues, it’s better to stay away from this one.

Njoy Eleven Review — How Does It Perform 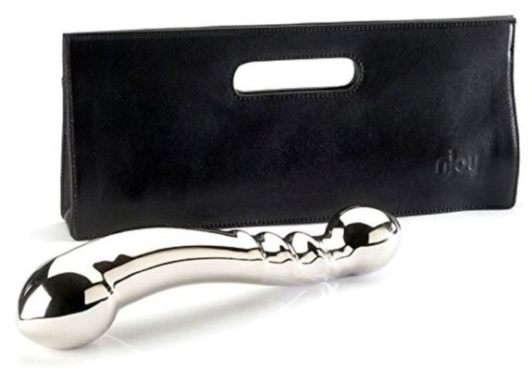 This shiny smooth toy may almost make you feel assured that you don’t need a lubricant. That may be true but use one anyway. Njoy Eleven can work with any type of lubricant, so feel free to use a bit before you begin.

The larger side of the Njoy Eleven may feel somewhat big, but it is amazing for G-spot stimulation. Unlike the Njoy Pure Wand, the Eleven does not directly massage the G-spot. Instead, the Njoy Eleven’s larger end feels more like it passes by and gives a massage to the G-spot with every thrust. It’s not so much a direct approach, but its larger size makes it feel so amazing. Orgasms are strong and intense, and stimulating the clitoris simultaneously feels great. There can be no guarantee, but if you squirt on G-spot orgasms, be prepared for waterworks!

Well, I can say that the Njoy Eleven is a great sex toy, with a few caveats. This toy is not built for everyone and it makes it plenty clear with its above average weight, size, and girth. Those are specific numbers, and if you think you can handle them, this sex toy is worth every penny you spend on it. To stave off a vague verdict for our Njoy Eleven review, I can say this sex toy is built for pleasure and it does a great job at hitting all the right spots.

But it now on Amazon.