The world of sex toys is getting high-tech. That applies not just to the functions many modern toys are capable of, but also to the innovative ways they have devised to deliver pleasure. Lelo Sona is of these amazing toys, a “sonic clitoral massager” that almost always brings on waves of pleasure. Rather than rely on vibrations or suction, the Lelo Sona makes use of sound waves to target and massage the clitoris. 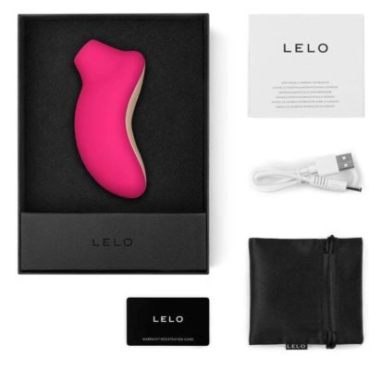 For all purposes, the Lelo Sona and the Lelo Sona Cruise are the same. The only practical difference between the two is the latter makes use of Lelo’s “Cruise Control” technology. The cruise control system in Lelo Sona Cruise holds up about 20% of the battery in reserve. When the Sona Cruise is pressed against the body and the system detects the power decreasing, Cruise Control kicks into action and picks up the speed and intensity of the motor.

This is amazing if you like your toy to make some gesture-based decisions. But if you prefer to keep things completely under your control, the Lelo Sona Cruise may not be your cup of tea. Come to think of it, the Cruise technology is quite similar to the SenseTouch technology used in the Lelo Smart Wand. On the plus side, the Cruise Control is much better executed.

The Lelo Sona Cruise is slightly more expensive than the Lelo Sona, so it’s entirely up to you to decide if the Cruise technology is worth the extra bucks.

While we are on topic about price, the Lelo Sona is priced quite reasonably (for a luxury sex toy) and is fairly affordable. Plus with the available offers on the Lelo website as well as Lelo Sona Amazon page, you can get quite a good deal!

Getting To Know The Lelo Sona

The Lelo Sona is a small, convenient to hold toy. Though dubbed the sonic clitoral massager, the Sona has a shape similar to clitoral sucking massagers like the Satisfyer Pro 2. And that’s where the similarities end. The Sona is indeed dedicated to literally making (sound) waves and works fairly impressively.

Its body is made from Lelo’s classic touch of silicone which is soft and almost pleasurable to touch. One side of the Sona has the metallic-colored ABS plastic sheet to signify its membership to the Lelo Insignia lineup. The controls follow the classic line as well, with the intensity +/- buttons flanking the pattern button.

The Lelo Sona is USB rechargeable and comes with a USB charger and satin storage pouch.

Lelo says that the Sona works using sound waves. To illustrate the idea, imagine you are standing in front of a very large speaker at a party or club, and you can literally feel the sound waves causing physical sensation. Now move the scene to your bedroom, with the source of waves reduced to a compact size called the Sona, and its vibrations pitched targeted at the clitoris. Whoa!

Vibrations from the Lelo Sona are supposed to stimulate the entirety of the clitoris. This means it goes beyond the clearly visible tip of the clitoris that most clitoral vibrators stimulate. It massages and stimulates the full clitoris, with particular focus on the internal clitoris.

The Practical — Using The Lelo Sona

The first thing you notice when you turn on the Lelo Sona is that this little sucker is NOISY. Well, I know this is a sonic massager, I didn’t think it would announce itself to the neighborhood when switched on. Yes, I’m exaggerating, but yeah, this device could do with some silencing.

Quite like other non-contact vibrators (like the Satisfyer Pro), the Sona does not directly touch the clitoris. Instead, it bombards the clitoris with relatively gentle vibrations that penetrate and stimulate the internal clitoris as well. You can actually feel the waves traveling along the clitoris.

The stimulation gets much less intense if the device is moved slightly away from the clitoris. It helps to keep the Lelo Sona (or Lelo Sona Cruise) right in position. While there is no movement involved, a good helping of lube seals the contact points of the Sona well, and its waves can solely focus on the clitoris.

It’s worth noting that the sonic touch might take some time getting used to. It’s a new technology, and a method that most of us do not have any prior experience with. So take it slow, and give it some time.

Word to the wise: If you are just starting with the Lelo Sona, take a second and ensure it is on its lowest intensity mode. Many people find the higher modes too strong, and it can take the fun out of the whole activity. So start with the lowest, and work your way up.

Building Up To The Big ‘O’

Lelo Sona does not work instantly. Instead, it takes its time building up the pleasure, building the tension and preparing you for the orgasm. If you would like to be done in a couple of minutes, it’s better to try another toy. However, if the journey holds more meaning, the Lelo Sona is a great companion.

On the plus side, the orgasms are amazing. Deep, satisfying, rumbly, toe-curling, shouting, and a-lot-more-adjectives orgasms. Yup, that buildup is totally worth it. Plus, since this is a non-contact sex toy, you can go another round right after; after catching your breath, that is.

Lelo Sona, as well as the Sona Cruise, carry the same Lithium-ion battery that takes about two hours to charge and offers an hour of playtime on a full charge. The first charge may take longer so be patient and let your sonic massager get ready for action.

The toy is completely waterproof, which means you can use it in the bath. As an added advantage, it makes cleaning the Lelo Sona much easier and you can easily get rid of any dirt. It pays to clean up your toy right after use and not having to deal with any dried up lube.

Both models are available in three colors — the Cerise, Pink, and Black. The toy comes with a one-year warranty and Lelo’s 10 year quality guarantee.

Lelo Sona and its sibling, the Lelo Sona Cruise are both very amazing devices. The innovative “sonic clitoral massager” is worth its name and can bring on deep and fulfilling orgasms. It might take some time to adjust, and it’s your personal preference that decides this game. However, the Lelo Sona is a fairly capable device that you should consider, if only for the novelty of the sensation!