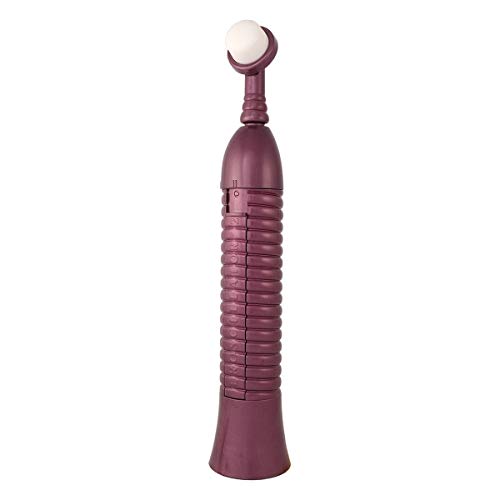 The Eroscillator (or Eroscillator 2 if you prefer to be specific, though only one version is available in the market), arrives in a white cardboard box with floral patterns. It’s an average packing — nothing very impressive, endearing, or anything to make a mark. Inside the box, you’ll find the Eroscillator, the wire and adapter, and its attachments. The attachments available depend on the package option you buy (more on that in a bit), and are also available to be purchased separately.

One thing that’s immediately noticeable is the lack of a pouch, a carry bag, anything to keep your Eroscillator in after you take it out of the box. It is a fairly expensive toy, and yes, I expect it to have storage option included like other modern decent sex toys. Oh, the packing also includes a promo DVD with a lot of marketing crap. A noticeable point on that DVD is an endorsement by Dr. Ruth Westheimer.

The body is made from ABS plastic, which is a good, non-porous material. Its attachments though are made from TPR, which the company claims is non-porous and phthalate-free. I’d prefer they were more forthcoming about the material used. The soft silicone attachment is made from, well, silicone, though it feels different than other silicone sex toys.

While not exactly similar, parallels can also be made with the Zumio, which draws inspiration from the movement of the fingers for clitoral stimulation. Of course, Zumio is more focused on pinpoint stimulation, while the Eroscillator’s attachments allow it a range of sensations.

Eroscillator 2 draws its power from the mains. As a corded device, you can expect it to limit mobility, though the Eroscillator’s wire tries its best to stay out your way. The cable is 12-feet, giving you ample space to move around and do your thing. Most of us won’t be moving around while using this, but not being limited to a small radius of a tiny wire has its advantages and appeal.

Getting To Know The Eroscillator Attachments

The full set of Eroscillator attachments contains seven specific pieces and four of them can be flipped for a different sensation. The attachments are:

Given the number of attachments, the Eroscillator 2 is offered in about five distinct bundles. All (except one) of these are characterized by the mix of attachments available. If you are looking for a specific set of attachments, please talk to the seller and ensure you have the required attachments. The common variations are:

Keep in mind, that these are common variations, though some retailers may also offer different sets of attachments. For example, there is also the Eroscillator 2 Plus without the soft finger attachment. You can buy it on Amazon.

Practically speaking, an Eroscillator review for performance is about its use as a clit stimulator. Yes, it has vaginal attachments too, but as I’ve said further up, I’m not much impressed there. So I’m going to focus on the attachments I liked, or at least have something more to say about than what I already said in the attachment description.

This attachment really lives up to its name. It’s soft, squishy, and feels great when placed against the body. If you like to put pressure on the clitoris while you enjoy yourself, this attachment is an excellent option. As you apply pressure, it can be gentle, yet firmly stay in place. It really has the vibe of using your own finger.

The soft squishiness of the fingertip attachment does take away some power from the Eroscillator, though not enough to actually be a bother. It still works great and can be immensely comforting.

A great thing about the Eroscillator is that it lets you build up to an orgasm. You won’t simply place this (or any other attachment) near your clitoris and find yourself in orgasm-land in a few seconds. This one takes its time, and the buildup is great. The result often is a toe-curling, knee-bending orgasm that is incredibly satisfying.

Since with the fingertip attachment you can pretty much let the Eroscillator stay at its job even as you reach orgasm, the results can be quite intense. If you like to stimulate the clitoris with your fingers for masturbation/orgasm, there’s a good chance you will love this attachment.

The Golden Spoon is another popular, and practically the default attachment for the Eroscillator. You can place the concave side to cup/cover the clitoris and let the toy hum away in all its glory. It is both simple, and convenient. Plus, it builds up to a great orgasm. The prospects of placing pressure are reduced as compared to the finger tip attachment, though there rarely is a need for that.

You can alternate the concave side with the convex side for more targeted and pinpointed stimulation, if that is what you prefer. The Eroscillator performs well in that arena as well, and the pleasure and stimulation feel great.

I would not brazenly dismiss other attachments, because these things are a matter of personal preference. While I was not impressed by the bristly side, or the name of the French Legionnaire’s Mustache, I know people who enjoy it. Same goes for other attachments as well, and in fact, the Grapes and Cockscomb is often a favorite with many customers.