There are plenty of words that describe the Lelo Elise 2. You can call it big, unyielding, filling, and fulfilling. It is all that, and more. Lelo Elise 2 personal massager/vibrator is one of the biggest (in size) offerings from Lelo.

The company describes it as “supreme power and a deeply fulfilling length, this iconic LELO targets your pleasure centers for the most intense, deep-reaching, body-shaking sensations you’ll ever experience”. They are obviously overselling it, but yes, the Elise 2 is a hot favorite. Let’s find out why with our Lelo Elise 2 Review. 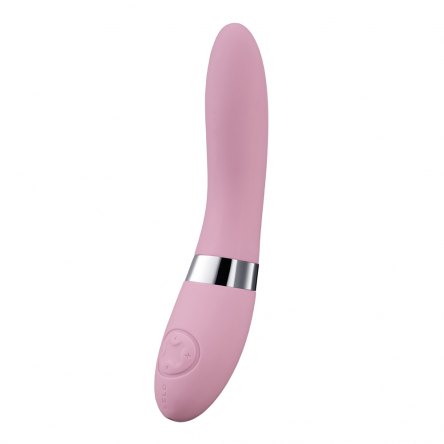 Lelo has released new models for several of its popular products, including the Elise. Before going further, let’s get a quick and somewhat simplified lowdown for Lelo Elise 2 vs Lelo Elise. To put it rather simply, all of the new range is built to be superior to the originals. The Elise 2 is bigger, more powerful, and with a better battery than the Elise. It is, quite simply, a new iteration of the Elise, and it does better than the original.

As we said, the Elise 2 is one of the largest products on offer by Lelo. And the dimensions show that, especially when compared to simpler models like the Lelo Ella, or even the Lelo Iris. The Elise 2 is 8.7 inches long, and has an insertable length of 5.25 inches. Remainder of the length is used by the handle that includes the control panel. The handle and the insertable length are separated by a metal accented piece of ABS plastic, giving a clear boundary demarcation.

It has a slightly curved shape, and tapers a bit towards the middle before expanding again into the bulbous end. Maximum circumference of the Elise 2 is 4.5 inches. Overall, while it would initially seem large, the Elise is just the right fit. Lelo Elise 2 has avoided going too slim or too girthy, managing a near optimal length and girth.

This personal massager is covered in Lelo’s signature silicone style — a matte finish that is extremely smooth and velvety to the touch. Quite an inviting feel actually, it basically sets the mood the moment you touch it. It stays in shape, and there is no room to bend the Elise 2 or have it yield even a little. Lelo Elise 2 is available in three colors: black, pink, and plum.

The silicone, as well as the ABS plastic used in the vibrator’s construction are phthalate-free, body safe and non-porous. Thanks to the high-quality choice of materials, it is easy to keep the Lelo Elise 2 clean and hygienic.

Elise 2 Motors That Power A Giant

Two motors power the Elise 2, one at the base of the shaft, while the other is placed near the top. The top motor of course does most of the work and pleasuring, while the lower motor happily buzzes along, creating buzzes to match the top and overall enhancing the work and stimulation put in by the top motor.

When inserted, the top motor takes the G-spot to task, while the lower motor supports the vibrations from the top, while simultaneously providing vibrations and pleasing sensation to the vaginal opening. The result usually is an amazing, very fulfilling orgasm that you will find many Elise 2 reviews (including this one) happily chirp about. Few vibrators make fans like the Elise 2 does, and for good reason.

Vibration And Intensity Functions On The Lelo Elise 2

The Elise 2 control panel is laid in a circular shape, with four buttons placed in a “plus” shape. Two buttons representing up/down arrows control the vibration patterns, while the other two represented by + and – control the intensity of the vibrations.

Primary function of the Elise 2 is to stimulate the G-spot and send you off on your merry way to an awesome, preferably earth shattering orgasm. The slightly curved shape works amazingly in this regard, making it easier to reach and stimulate the G-spot.

Work with the Lelo Elise 2 to reach your g-spot, and then get working on it with the army of patterns and intensities at your disposal. As it works its magic, either through individual motor patterns or having both motors work in tandem, you will realize how remarkably unique and pleasuring these pattern sensations can be.

Lelo Elise 2 is a wonderful sex toy, and we actually had to struggle to find a fault for it. Even though, keep in mind that like everything else, how well this toy works for you depends on your preferences and body. Should your body find the Lelo Elise 2 to be too large for your vagina, there isn’t much to be done.